Stock market volatility has made many investors look for defensive investments, and tobacco stocks have traditionally fit the bill. British American Tobacco (NYSE:BTI) is a London-based company, but its acquisition of Reynolds American in 2017 gave BAT the No. 2 position in U.S. cigarette market share.

Yet even well before the coronavirus pandemic hit, British American was dealing with a host of challenges, and investors hadn’t been very happy with the stock’s performance. At this point, BAT’s declines have made it look especially attractive to value investors, but prospective buyers want to know whether they’re getting themselves into a value trap. Below, we’ll look more closely at British American Tobacco and whether its stock is a good buy. 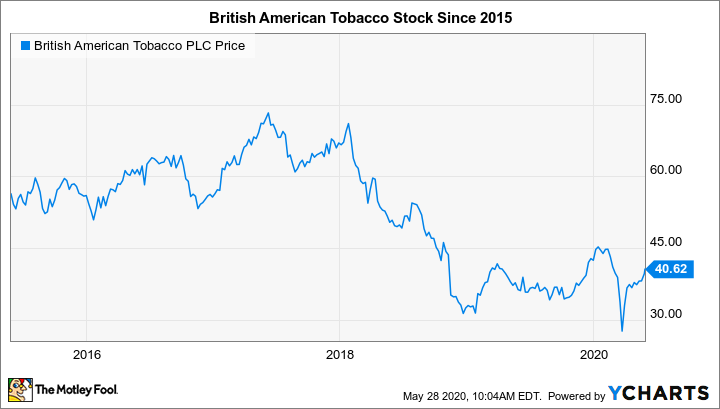 Over the long run, British American Tobacco has had to deal with the secular decline in cigarette smoking. For several decades, the number of smokers has fallen, and that’s forced companies like BAT to use their pricing power in order to boost profits and maintain revenue growth.

BAT’s acquisition of Reynolds American gave it global rights to extremely popular brands like Newport, Lucky Strike, and Pall Mall, complementing international brands like Dunhill. Yet even with considerable brand loyalty among its customers, British American has still dealt with volume declines in line with the industrywide trend of roughly 2% to 3% per year.

Attempts to ban smoking through litigation in the 1990s and 2000s failed, but since then, opponents have taken a different tack. Through increased regulation, governments have made it harder for BAT and its peers to find new pathways to growth in the traditional cigarette market. Meanwhile, consumer advocates have worked to keep new generations of youth from starting to smoke in the first place. 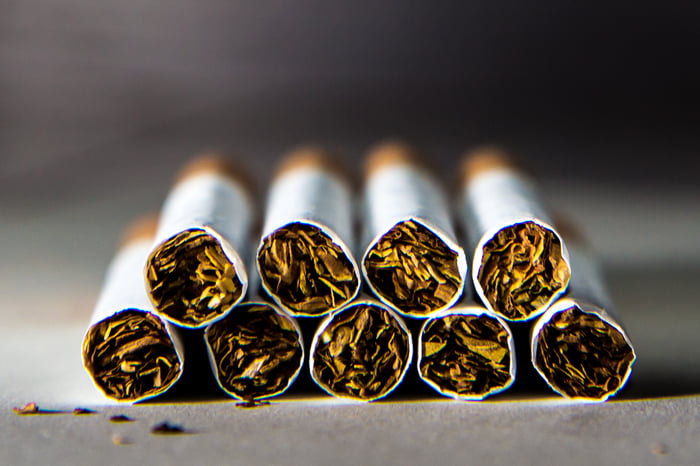 A shift toward alternatives

In order to reflect changing consumer trends, BAT has aggressively pursued what it calls “new categories,” which include tobacco heating products and vapors. Offerings like the glo tobacco heating product and the Vype vapor brand have seen a measure of success, and British American remains excited about their potential.

Yet even these alternatives have faced regulatory fights. The U.S. Food and Drug Administration has been slow in its work to allow modified risk tobacco product applications to move forward. Internationally, BAT has seen some successes, but they’ve thus fallen far short of the full potential that shareholders and the tobacco company itself sees in reduced-risk products.

More recently, BAT has gotten embroiled in controversy. The company is under criminal investigation by the U.S. Department of Justice and an office within the Treasury Department, with allegations suggesting that the tobacco company may have improperly done business in countries that are subject to economic sanctions.

What British American has going for it

As with many companies, British American has seen pressure from the coronavirus pandemic, as many people facing financial impacts from lockdowns and other measures to fight the spread of the virus have had to make tough decisions about their spending. Yet BAT is one of the more surprising players among companies seeking to develop a working COVID-19 vaccine. Early signs of plant-based biotech work toward a vaccine have been promising, although it’s far from certain whether BAT will emerge as the first solution to halting the spread of the pandemic or prove to have the most effective vaccine in the long run.

BAT shares the tenacity that most tobacco companies have demonstrated over the long run. A solid dividend now yields almost 7%, and even with the challenges the industry faces, BAT’s cash flow remains plentiful. The secular decline in smoking has been a gradual one, and that means British American’s business won’t evaporate overnight, even if alternative products to traditional cigarettes don’t pan out as well as many hope.

The near future is likely to remain turbulent for shareholders in British American, especially if dire economic forecasts prove to be correct. Investors with long-time horizons can expect the tobacco stock to bounce back from adversity, but those who don’t have the patience or long-term confidence in the business model that BAT is pursuing might be better off steering clear.

Have $5,000? 3 Coronavirus Stocks You Can Buy in July Without Losing Any Sleep

Put your portfolio to this 5-question test