According to last week’s The Wall Street Journal, the top-stock buyer for the government of a very oil-rich Middle Eastern nation has been scooping up multiple shares of Marriott and Boeing (Disney World and the airliner) big time since the record 11-year bull market ended in mid-February.

Obviously the buyer thinks the two giant companies, both hard hit by lack of customers because of the coronavirus pandemic, are good buys. And have no place to go but up. Over time, maybe? And while he must be very good at his job, and works for an employer who frowns on failure, and may well be onto a good thing should you as someone investing for retirement via the Thrift Savings Plan be doing the same?

A lot of people who know how the market works and what the TSP was designed to do would probably say don’t do it. In part because it involves timing the market — buying when it is low, selling when it is high — which is a lot easier said than done.

Arthur Stein, a Washington, D.C.-area financial planner with lots of federal clients, is not a fan of market timing. And he says “this year is a good example of how difficult it is to time the markets. And how important it is to understand what is meant by the terms ‘bull market’ and ‘bear market.’”

He’s going to be my guest on today’s Your Turn radio show  at 10 a.m. EDT. If you have questions for him please send them to mcausey@fedealnewsnetwork.com before show time. Meantime, as a study guide he produced the following to show the difference between bull markets and bear markets, which illustrate why most of us shouldn’t try to time the markets:

The illustrated guide to bull and bear markets

“Bull market” and “bear market” are common financial terms and it’s important for investors to know what they mean. The short definitions:

The table below illustrates bull and bear markets this year. 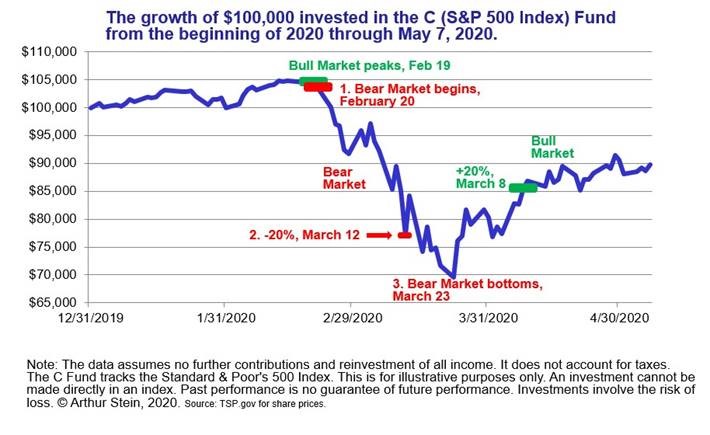 The bull market that began in 2009 continued until Feb. 19 of this year. That made it the longest in U.S. history. There were many declines, but no 20% or greater decline, during the eleven-year period.

Wow. We are not even halfway through 2020 and have already gone from bull to bear to bull.

We also saw multiple examples of “bear market rallies,” a short-term increase in stock prices during a longer-term bear market. The rally appears to be the end of the bear market but is not. The rally ends and then the market continues to decline past the level where the rally began.

According to Investopedia.com, “every bear market has spawned at least one rally of 5% or more before the market corrects. Two-thirds of the 21 bear markets that occurred between 1901 and 2015 experienced rallies of 10% or more.”

There were three bear market rallies before the current bull market began. They ranged from 5.9% to 9.3% and only lasted a day. Bear market rallies make it difficult to time the markets. Only after the rally either ends or continues and creates a new bull market do we know whether it was a temporary fluctuation or the end of the decline.

Bear markets, bull Markets and bear market rallies can only be judged and named in retrospect, after they have occurred. By the time we know, it is usually too late to profit from the information.

The reason many people reportedly like the smell of gasoline is thought to be due to one of its BTEX compounds, called benzene. Its naturally sweet smell is especially perceptible to human noses, and it can trigger pleasant memories like road trips or spending time on a boat. Benzene, which is a carcinogen, can also, when inhaled, have a suppressing effect on the nervous system resulting in a temporary, euphoric feeling.

Is Teva Pharmaceuticals Stock a Buy?